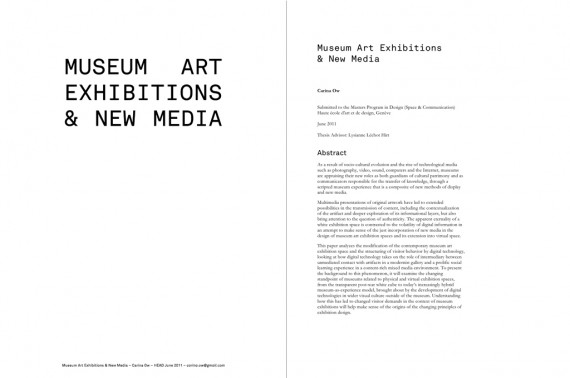 As a result of socio-cultural evolution and the rise of technological media such as photography, video, sound, computers and the Internet, museums are appraising their new roles as both guardians of cultural patrimony and as communicators responsible for the transfer of knowledge. Through a scripted experience that is often a composite of new methods of display and new media, museums today seek to create environments in which visitors gain understanding and new knowledge through the interpretation of exhibits.

Art exhibitions in museums have much evolved since the 19th century. Transforming from knowledge repository in the 19th century, to visitor-oriented learning gallery in the early 20th century, to neutral display space in the post-war period, contemporary museum art exhibition space today is increasingly often a combination of these models, presenting its modern-day visitors with easily accessible information, while challenging traditional museal decorum through its propositions of visitor interactivity. The abstract art movement that began in the mid 19th century played a significant part in the emergence of the non-taxonomic modernist exhibition space that did not enforce any particular way of interpreting a work of art.

This space should convey images, ideas and emotions to the viewer, emerging directly from the work of art. The mastery of such a space devoid of external influences called evidently for its closing off from the world outside, resulting in a windowless space turned towards the inside, empty except for the spaced out works of art floating on white walls within galleries that were connected by unadorned openings in the walls. Paradoxically, in the attempt to sidestep the Museum Effect through the policy of elimination of contextual elements, the resulting blank volume came to exemplify an extremely moderated, connotative space. The fact that it predisposes a visitor to possess substantial knowledge of modern art in view of the absence of informational cues results in the fostering of exclusivity and elitist undertones amidst its viewership. Since the 1960s, artists and art critics have confronted the incongruity of this white cube space that harbors a number of ambiguous notions within its illusory transparent veneer. The pronounced aesthetic of the vacant space exerts partial notions upon the artwork displayed within its confines.

Too often in today’s art museums, an overbearing stillness weighs upon the visitor’s presence, which is diminished to that of shuffling from one artwork to the next in silent contemplation, completely disconnected from the world outside. Conversation is rare and if it does take place, it is hushed and suppressed. Visitors find themselves in an unnatural situation where they are forced into complying with the underlying museum decorum that seems to suggest that the environment was devised for the action of appreciating more than for the exchanging of ideas. At the same time, there is an evident trend in the development of programmed public events (performances, film screenings, talks, etc.) and supporting functions (library, food & dining, shopping, etc.) accompanying exhibitions in white cube museums. This indicates an inclination towards the creation of a more social setting that encourages more open attitudes and free exchanges between visitors.

Since its beginnings, the white cube model has seen only minor adaptations from time to time despite the blatant fact that its environment is clearly one that is esoteric and has in part contributed in part to the increasing futility and lifelessness of contemporary art. The ongoing debate from the 1970s on the white cube as the preferred mode for the presentation of art undoubtedly indicates that it is timely to examine alternative models that allow the visitor to enjoy a more intimate connection to a work of art instead of always being confronted with a picture on a large white surface. Variance and multiplicity in media could be one way to bring dynamism and originality back to art and the museum.

With the eminent departure of the art museum from didactic presentations, there is a clear partiality for exhibition experiences that seek to engage visitor participation. New media is assuming an increasingly significant role in museums, especially in the form of interactive technologies that empower the visitor in the gallery, such as the democratization of knowledge, the contextualization of information, the reintroduction of tactility and the provision of additional learning material on-demand. In response to these developments and trends, it is imperative for designers to consider the pertinent incorporation of new media installations that can cater to these new demands through the formal reshaping of the display space. Drawing from the notion of ubiquitous computing, designers may begin by redesigning the point of connection between the visitor and the exhibit by reflecting on the boundary that separates, or rather connects (depending on the point of view), real and the virtual elements.

Going beyond strict knowledge transmission functions, art exhibitions should stimulate the circulation of ideas from the display to the visitor in the form of facts, reasoning and emotion. Sentiments form an important part of the overall visitor experience because it is through feelings that exhibits can touch people. When a visitor identifies with the artwork and artistic concepts on show via his personal experiences, he/she is then able to delve deeper into the subject, even beyond what is exhibited, and achieve a better overall understanding.

Urged by the apparent receptiveness of art museums today to new display strategies and the obvious potential of new media as a supporting medium, this experimental project suggests that the contemporary museum art exhibition space could go beyond the recurrent white cube and appropriate certain elements from experience-based exhibition concepts. The apparent eternality of a white exhibition space will be challenged by the volatility of digital information in an attempt to make sense of the just incorporation of new media in the design of museum art exhibition spaces and its extension into virtual space.